I’ve explained before how I ended up with 44 chickens, right?  It’s a little convoluted, and you might wonder how I didn’t notice that I had 40 chicks living in a box in my garage. It happens quickly…especially when they’re small, and cute.

I’ve been worried that the 40 chickens in my coop were crowded.  It seemed like you couldn’t walk in the coop without nearly stepping on a chicken.  Especially as they got older and larger. 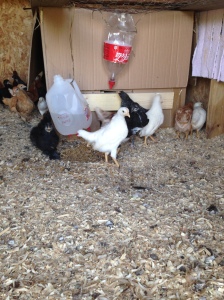 Last night, the 20 I was keeping for a friend went to their new home.  I was so excited for them to get to live in their brand-new-never-been-lived-in coop!  And I went to bed with dreams of what I’d do with all the extra money from cutting my feed bill in half.

Then I woke up and went out to see what I had left (it had been dark by the time they’d left the night before).  The coop was virtually a ghost town!

Now keep in mind that the most I’ve ever owned up to this point is 12, so the 20 I have is still a lot.  It really maxes out the coop.  The problem is chicken math.

Chicken math; chik’-uhn. māth  (noun) The phenomena in which no matter how many chickens you expect to own or for which you build your coop, you will end up with more than that number, even when you take into account chicken math.

Finding joy in the simple life.

...not the stereotypical picture

Once Upon Your Prime

Where You Live Happily Ever Laughter!

Adventure and Life in the Arctic

The Art and Craft of Blogging

Pretend to be Nice

Bring Freshness To Your Life

My long, winding road through life

A Guide to Easy, Everyday Meals

My rambles about running, fitness, food and life.

The latest news on WordPress.com and the WordPress community.